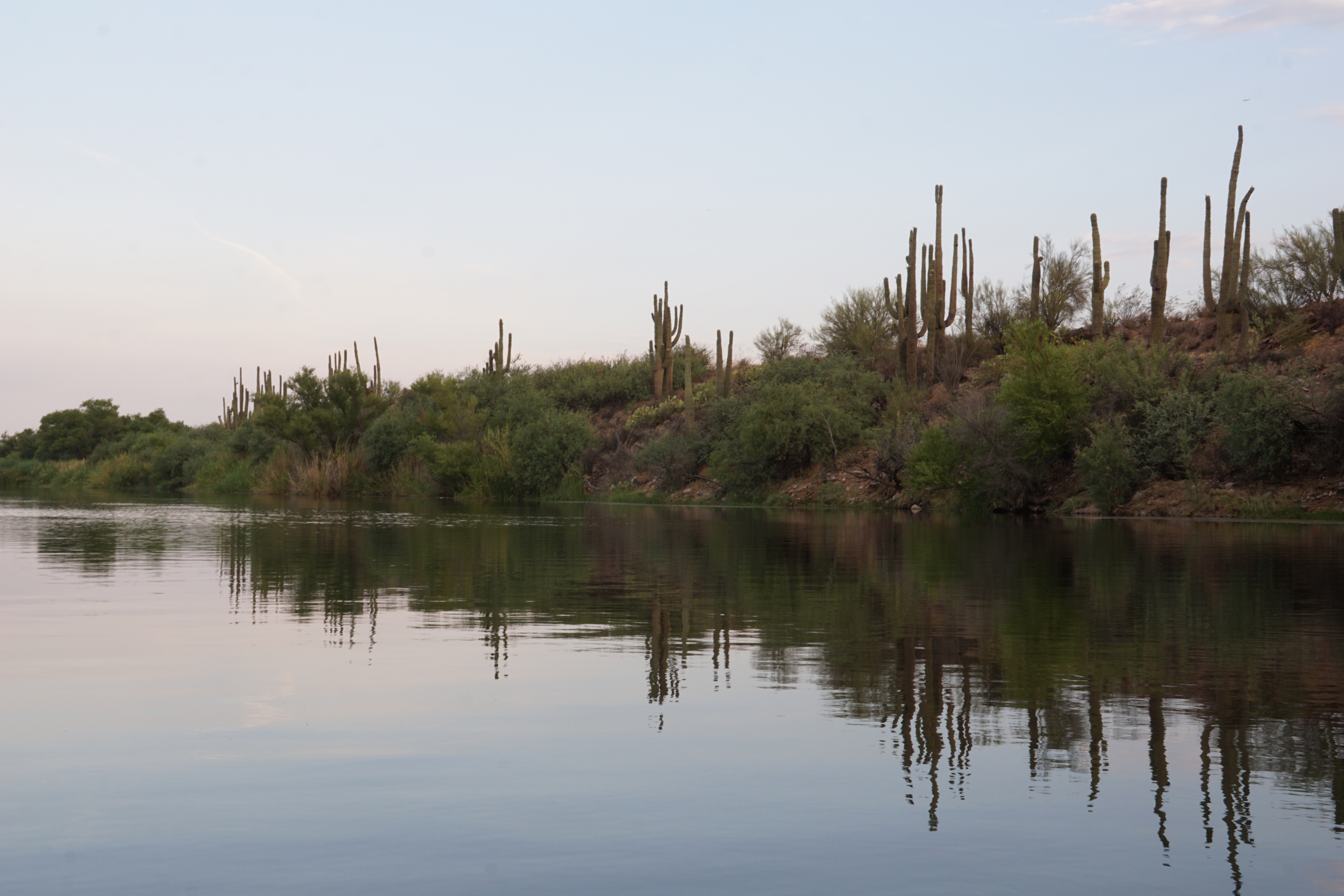 I finally got a chance during my staycation, over the week of July 4th to go kayak the Salt River. Kayaking has recently become one of my hobbies. I love being able to get to nature and unwind and enjoy the beauty!

My awesome husband crawled out of bed at the crack of dawn with me in order to shuttle me up to the put-in point, which is only about 20 minutes from the house! We left my car at the bottom so I could drive myself home and not worry about meeting a time, but we expected it to take about 2-2.5 hours, based on someone else’s advice.

I was on the river at 5:30 am, there were a few others launching, but early is best on this river to beat all the drunk college kids onto the water and actually enjoy the peace!

If you are unfamiliar with this area, you may not be aware of the bands of wild horses that live on these sacred Indian lands. They are such a treasure and we are blessed to have such access to this beautiful area!

Along the river, I was pretty much solitary, random fishermen along the banks in areas and those birds playing around behind me, seeming to mock me, because I really wanted some pics of these birds! They are black with some red along the neck area and there were a lot of them! An occasional large fish would dance out of the water, which always made makes me giggle a bit.

I ran into a few areas of light rapids, and these were exhilarating. I should mention, this was my first solo trip in a kayak down a river, so there were a lot of firsts on this trip for me. The rapids were one of them. J This photo isn’t the best, it’s a screenshot of a 360 photo I took. The Rapids are also the easiest I encountered of the day, there were several others that were quite challenging for this first timer.

Overall, I probably had about 5 different encounters with the horses throughout the day. But the first was the most emotional, if that’s the right word, of the encounters, for me.

This band of horses crossed the river right in front of me, and stopped. As I’m floating towards this, trying to not miss a single photo, but trying not to invade into their space, I grabbed some shaky video and lost a toenail digging in trying not to float right into their space… I was so awestruck by the majesty and power they exuded! They were not moving that fast, but sounded like thunder as they moved through the water and back onto shore. I was so blessed to have this encounter! This isn’t my best shot of the day, but it was the best moment by miles.

All in all this was such a beautiful day. The sky stayed overcast, which not only helped with my photos, but also helped with the heat that was probably around 100 degrees by the time I came to the pull-out spot.  From top to bottom, it ended up taking me 4.5 hours only stopping or slowing for photo ops!  I exited at Granite Reef, which is the last stop before the dam.

Out of this world baby shower!